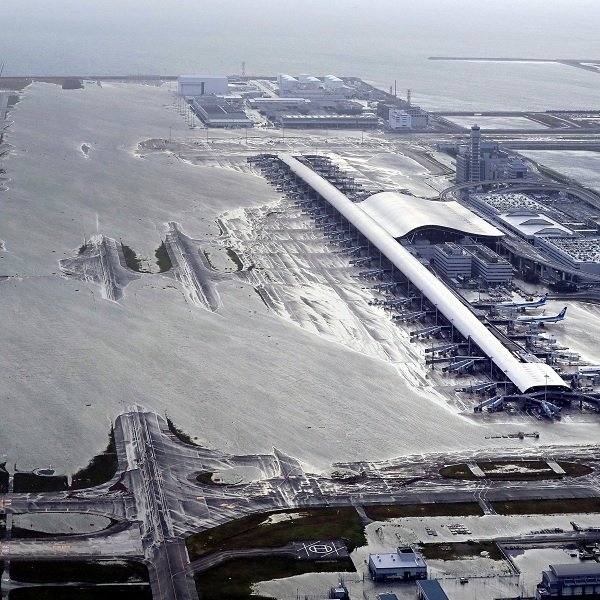 Tokyo (AFP) -- Japan's Kansai airport will reopen partially on Friday, the government said Thursday, after a massive typhoon flooded parts of the transport hub and swept a tanker onto the only bridge connecting it to the mainland.
The collision left the airport, which is on an artificial island, temporarily cut off, stranding thousands of passengers and staff and forcing authorities to evacuate them by boat and bus.
"Domestic flights in the Kansai international airport will resume tomorrow, and international flights are set to resume operation as soon as preparation work is done," government spokesman Yoshihide Suga said.
The airport, in Japan's western Osaka region, was battered by typhoon Jebi, which made landfall Tuesday as the strongest storm to hit Japan since 1993.
Waves whipped up by the storm also flooded parts of the airport, including runways.
Airport CEO Yoshiyuki Yamaya said Thursday that virtually all those stranded had now been evacuated and work was ongoing to resume normal operation.
"A major issue we face now is to secure smooth access to the island," he said, with the bridge running to the airport badly damaged by the tanker collision.
Earlier, Prime Minister Shinzo Abe said "work, such as draining water, is being done around the clock", public broadcaster NHK reported.
"Many issues remain, such as damage done to the fuel facility," he added.
Kansai is a major hub for both passenger and cargo flights, and operates around 400 flights a day.
The disruption to operations could impact tourism and business in the region, Japan's industrial heartland.
Jebi left a trail of destruction as it barrelled across Japan on Tuesday, killing 11 people and injuring dozens.
The storm was the latest in a series of natural disasters to hit Japan this summer, starting with record rains in July that triggered flooding and landslides that killed over 200 people.
Early Thursday, a strong earthquake rattled the northern Japanese island of Hokkaido, killing at least one person and injuring over 100.